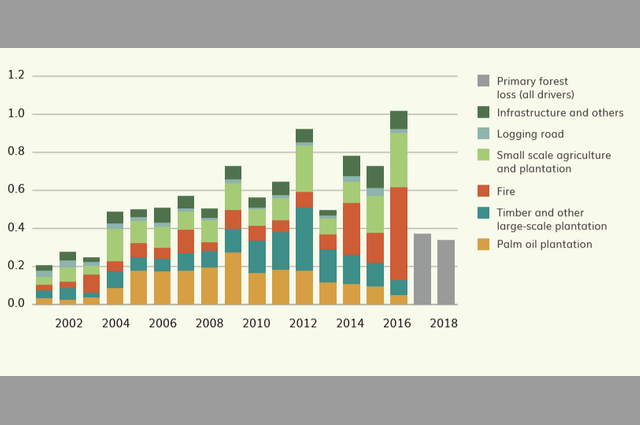 a quarter the size of the Amazon rainforest.
The Guardian:
http://www.theguardian.com/environment/2014/jun/29/rate-of-deforestation-in-indonesia-overtakes-brazil-says-study
Indonesia has greatly under-reported how much primary rainforest it is cutting down, according to the government’s
former head of forestry data gathering.
UN and official government figures have maintained that the country with the third biggest stretch of tropical
forest after the Amazon and Congo was losing 310,00 hectares of all its forest a year between 2000 and 2005,
increasing to 690,000 hectares annually from 2006 to 2010.
Exact rates of Indonesian deforestation have varied with different figures quoted by researchers and government,
but a new study, which claims to be the most comprehensive yet, suggests that nearly twice as much primary forest
is being cut down as in Brazil, the historical global leader.
Belinda Arunarwati Margono, who was in charge of data gathering at Indonesia’s Ministry of Forestry for seven
years and is now on secondment at South Dakota university, calculates that nearly 1m extra hectares of primary
forest may have been felled in the last 12 years than was recorded officially.
In the paper in the journal Nature Climate Change published on Sunday, Margano says primary forest losses totalled
6.02m hectates between 2000 and 2012, increasing by around 47,600 hectares a year over this time. Because previous
estimates of forest loss have included the clearing of pulp plantations and oil palm estates the real loss of
primary forest has until now been obscured.
In 2012, she calculates, Indonesia lost 840,000 hectares of its primary forest, compared to 460,000 hectares in
Brazil, despite its forest being roughly a quarter the size of the Amazon. This, says Margano, was the most lost
by any country.
Annual primary forest cover loss, 2000–2012, for Indonesia as a whole and by island group (Sumatra, Kalimantan,
Papua, Sulawesi, Maluku, Nusa Tenggara and Java and Bali). Dashed lines are linear fits to the data. Photograph:
/Nature Climate Change
The new figures are significant because Indonesia is the world’s third-largest producer of greenhouse gases behind
China and the US, with 85% of its emissions coming from forest destruction and degradation. Primary forests are
the largest above-ground carbon stores in the world.
Margano said that the discrepancies between the figures were due to technical and bureaucratic problems in
Indonesia and better information becoming available. “Government cannot share data fully because of laws. There is
no transparency”, she said.
But the figures are potentially embarrassing because they suggest that a 2011 moratorium on granting new licenses
for clearing or logging of primary forests and carbon-rich peatlands could have been a driver for deforestation.
Margono and co-author Matthew Hansen said the new data from remote sensing showed that the extra losses came
largely from the felling of primary forest in wetlands and in government-protected areas.